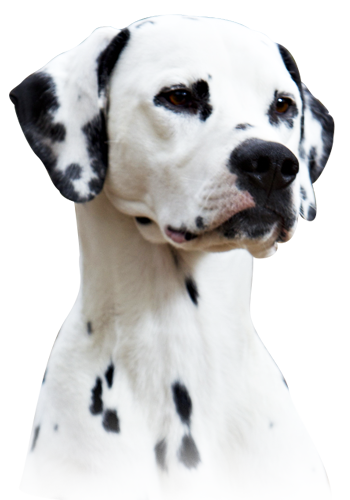 BRIEF HISTORICAL SUMMARY: The origin of the Dalmatian dog can be recognized in paintings and in church chronicles from the 16th to the 18th century. Dalmatians can be found on the altar painting “Madonna with Jesus and Angels” in the church “Gospa od andjela” in the town Veli Losinj, island Losinj in Croatia dating back to 1600 – 1630 and also in a fresco in Zaostrog, Dalmatia, Croatia. It suggests that the Dalmatian originates from the eastern Mediterranean region, in particular the historic province Dalmatia. The first descriptions of the Dalmatian were found in the diocese Djakovo, in the Croatia, namely in the church chronicles of the Bishop Petar Bakic from the year 1719 and the church chronicles of Andreas Keczkemety from the year 1737. The dog was named with the Latin name “Canis Dalmaticus” and the height of the dog described with 4-5 “Spithamus”. Thomas Pennant described this breed in his work “Synopsis of Quadrupeds” in the year 1771 as very independent, named it “Dalmatian” and wrote the origin of this breed to be Dalmatia. A work by Thomas Bewick, published in 1790, refers to this breed as “Dalmatian or Coach Dog”. The first unofficial Dalmatian Standard was written by an Englishman named Vero Shaw in the year 1882. After the formation of the Dalmatian Club in England in the year 1890 this standard was transferred to the first official breed standard. St-FCI n°153 - 30.05.2011 3 The FCI published the first Dalmatian standard on the 7th of April 1955 under the name of “Dalmatian Huntingdog”.

GENERAL APPEARANCE: Mesocephalic. Head prismatic form with hanging ears. The body is rectangular, strong, muscled and distinctively spotted. The movement must be elegant. The sexual difference must be visible.

BEHAVIOUR AND TEMPERAMENT: Pleasant temperament, friendly, not shy or hesitant, free from nervousness and aggression. Lively kind, loyal, independent and easy to train. The Dalmatian likes water and outdoor activities. It has a marked hound instinct.

HEAD: The head must be in proportion and harmony with the rest of the body and not too wide in the skull area. The length from the occipital protuberance to the stop and from the stop to the tip of the nose equals 1:1, or the muzzle is slightly shorter. The upper line of the skull and the upper line of the muzzle are slightly divergent. The masseter muscle and the cheek bone must not be too developed. The head must be entirely free from wrinkle.

NECK: The neck should be strong and fairly long, tapering towards the head and free from throatiness.

BODY: Rectangular, proportions of length of body to the height at the withers is 10: 9.

Withers: Well defined.
Back: Powerful, level.
Loin: Short and muscular.
Croup: Muscular, inclined less than 30°.
Chest: Deep and capacious, not too broad or barrel-shaped. The depth of the chest should be 45-50% of the height to the withers. The height of the elbow is 50% of the height to the withers. The ribs are well sprung.
Underline and belly: The belly is moderately tucked up but not drawn in. St-FCI n°153 - 30.05.2011 5

TAIL: Set on at the extension of the croup. Reaching approximately to the hock or slightly longer. Strong at the base evenly tapering towards the tip, not too thick but in proportion to the body. Carried sabre-shaped. Preferably spotted.

Hair: Short, shiny, hard and dense all over the body.
Colour: The ground colour is pure white. Black spotted variety with black spots, liver spotted variety with brown spots. The spots should be symmetrically placed all over the body, clearly defined and without intermingling into the white ground colour. The size of the spots should preferably be even, with a size of 2 – 3 cm in diameter. In the brown variety the spots are a little smaller, around 2 cm. The spots on the head and on the legs should be proportional smaller than on the rest of the body. It is desirable the tail is spotted too, with spots also proportional smaller that those on the body. Splashes on the body are not desirable and should be penalised. The spots must not intermingle, i.e. forming large patches. Patches and coloured areas are not desirable. The spots on the ears should be especially noted.

Height at the withers: Males 56 – 62 cms. Females 54 – 60 cms. Dogs with excellent type and balance should not be penalised if above the upper limit.

FAULTS: Any departure from the foregoing points should be considered a fault and the seriousness with which fault should be regarded should be in exact proportion to its degree and its effect upon the health and welfare of the dog and on its ability to perform its traditional work.